Picture this: a huge circle mostly filled with men all dressed the same and chanting to bring luck to their gods. No this isn’t a cult. This is a premier league football match. 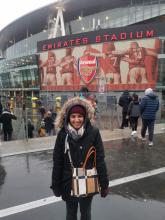 Image: One smiley rained on girl ready for her first Arsenal match.

I went to my first premier league football match. My partner, Will, has been an Arsenal fan all his life. Back in the summer the new kit was announced and we both made the journey to N5 to get the new attire before anyone else. It took months before we happened to get tickets for a match at the Emirates stadium. But valentines’ weekend we found some cheap tickets online and went for it. 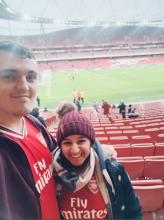 Image: our pregame photo showing our matching shirts off.

Bundled up in our warmest clothing we got the train across to London for the day. It was pouring with rain so prior to the match we visited our favourite nerd store Forbidden Planet followed by a McDonalds lunch. When the time for kick off was nearing we got on the Piccadilly line and made our way to Arsenal.

Though we were early the excitement in the air was already apparent. Fans were hopeful as their beloved team had not lost a single premier league match since the turn of the new year.

The game started and the atmosphere was electric. Though all four of the goals scored in that game were at the opposite side of the pitch to where we were sat the burst of elation from the crowd for every time that ball past that line was like nothing I had witnessed before. 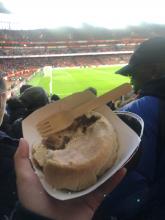 I treated myself to my first football stadium pie and left the game raring to go to another when the premier league resumes.