My story is one told through snippets of information voiced by me, spoken by others and the effect it had on our family.

It’s the story of almost losing my mother in a road accident. Granted, I was just 3 years old at the time, but as a very inquisitive child, I was aware of what was going on. Some may say I was born to be a journalist.

The irony of my boyfriend riding a motorbike for a living serves as a dark joke to my mother rendered lifeless coming off of one, in an accident 15 years ago.

To set the scene, my mum and dad were traveling back from a wedding in Brighton, East Sussex, after themselves only just being married a week. My dad, who has motor sport in his blood, borrowed 1200 Suzuki Bandit and with my mum on the back were happy, care-free newlyweds.

Turning off the roundabout were my parents, remaining in their lane to join the dual carriage way. A man in a car continued on the roundabout in what he presumed was the correct lane. He collided with the motorbike. It sent my mother feet into the air for her body to come crashing down, head descending onto the curb.

Rushed to hospital. She was induced into a coma.

I would say that’s the last moment she remembered, before it all went black and fuzzy. However, that’s not quite true. That 28-year-old women with a new husband, two young children, a life and a job of her own, woke up 16 again. No partner, certainly no little ones of her own, she believed she was a child herself. The last 12 years were eradicated. No wedding, no family, no house, no job. She had woken up at home, probably dreading going into school, about to argue with her mum shouting up the stairs to get dressed.

Responsible for causing this accident was a middle-aged man from Denmark, having just received his hire car from nearby airport, Gatwick.

Rushed back to Denmark after possibly facing a death by dangerous driving charge, the justice of the case remains cloudy. I suppose in a time of such despair, all you can focus on is the fear of losing your loved one.

They say your brain blocks out traumatic or stressful events as a coping mechanism - dissociative amnésia - but this was above that. 12 years unaccounted for. Her trauma wasn’t the accident, it was the life she had now lost. In fact, lost doesn’t begin to describe it.

I guess that’s why I’m telling this story. Because she can’t, she can’t remember.

Just after the accident I had my suspicions something was going on - as I have been informed. A question, I had a question for my grandad and this broke him a little. Still now he tells me this story with deep sadness in his eyes. 3-year-old me turned to my beloved grandad and I asked him, quite simply and quite plainly; “Is my mummy dead?”.

My mother is the epitome of 3rd time lucky. On the third day of her coma she was able to breath on her own. The doctors took her off the life support machines and patiently waited to determine her mental state, everyone hoped for minimal brain damage, everyone prayed for her to come back.

A settlement was made to my mother and father, but what price could have been enough for all our lives changing from that day forward? No amount of money was enough. We wanted memories not money.

During her stay in hospital my aunty took me to visit her. After a day of cuddles in the hospital bed, keeping a 3-year-old entertained, my mother turned to her sister in law and said; “Thank you for bringing your daughter, she’s lovely”. It was then all a bit too real. My aunty swallowed the choke in her throat and said; “It’s okay, see you soon”. She couldn’t bear to break it to her. That was her daughter, that was me, and she had no idea.

Recovery was going to be harder than any had thought at that stage. No one really knew how far gone she was, how much she could be reminded of, if she would ever get it all back again. After only 10 days in hospital she was sent back home, with not only zero memory but with a fractured neck.

Very slowly she regained her memory. Each day she’d wake up and forget what she learnt the previous. So, everyone played their role in reminding her. The hospital had abandoned my mum so it was down to our family to take on this burden.

My family are strong. My nan, a carer her whole life and foster mother to countless children as my mum and her brothers grew up. If anyone could get her back it would be my nan. As tough as nails she is.

Newspapers and TV exploited my mum’s vulnerability at the time. My father and mother were interviewed for articles in the papers and spoke once on TV, it was too much to handle at the time so it stopped. She was just a headline for a while, people wanted to have the story, they didn’t actually care. ‘My wedding from hell’ and ‘Wife doesn’t remember her wedding day’. I was in the article, pictured with my parents, my first feature, there has to be a silver lining somewhere. 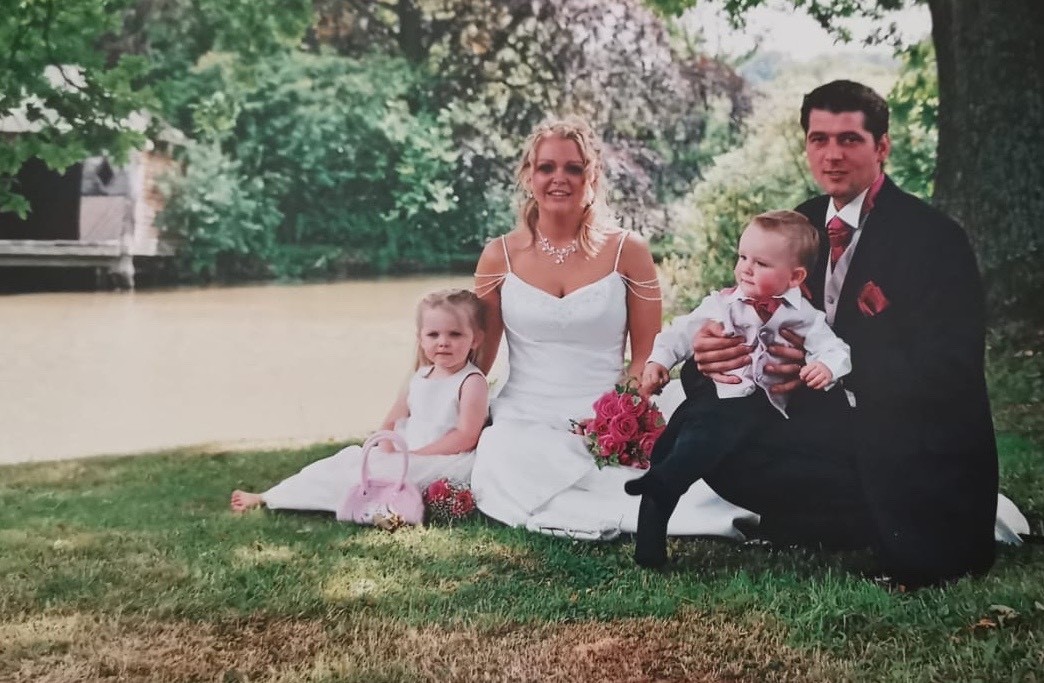 Although my parents divorced 7 years later, they still remain good friends now. I think that when you’ve been through life and then nearly death with someone, a vow remains.

I think sometimes it must be hard for her to watch her little girl on the back of a motorbike as she once did. She must worry. Only life doesn’t stop because something bad happened once. If we all adopted an attitude of ‘buts’ and ‘what if’s’, we would all idle about, staying indoors, fearing the roof collapsing because in reality there is a risk to every aspect of life. Now, we just go about minimizing those risks.

To this day, parts of my mum are missing. To me she’s always been the same, but to her family before me, they’d say it changed her. Physically, she suffers with pain in her neck constantly and has no sense of smell at all. Mentally, that probably suffered the most, her mind in a complete muddle. Now, recovered as fully as possible, still 15 years on, she can’t account for one month of her life, including her wedding day. She got lucky. I got lucky. I got my mum back, whatever version that may be, I still have my mum and my best friend. Losing my mum or losing her memory