Damned if you do, damned if you don’t. More and more teenagers are leaving school having not mastered their own language, yet any attempt to tackle this problem early on is somehow over-testing young children. It’s a catch 22-situation.

On the face of it, Nicky Morgan’s controversial Year 2 SATs exams leaving children in floods of tears and unable to sleep at night sounds not only petty of the government, but pretty totalitarian. After all, with barely any of us even remembering our SATs, let alone a Level 4 or 5 going anywhere near a CV, is it not reasonable to scrap the tests, let 6-year-olds dry their eyes and go back to the happy, carefree things they were always supposed to be? Not quite....

It’s true that you don’t need to know what an auxiliary verb is to get where you want in life. As an English graduate with a reasonable degree of confidence when it comes to using the English language, I can’t remember what a preposition is, let alone a subordinating conjunction. But unlike 6-year-old children, I know what doesn’t sit right in a sentence, and that’s the problem with arguments like the one shared below. Children’s author Abi Elphinstone may claim she doesn’t understand what a modal verb is, but at one point in our happy-go-lucky primary school lives, teachers had to tell us the nuts and bolts of the English language. We may not remember it now, but knowing the difference between your and you’re doesn’t magically appear from thin air. 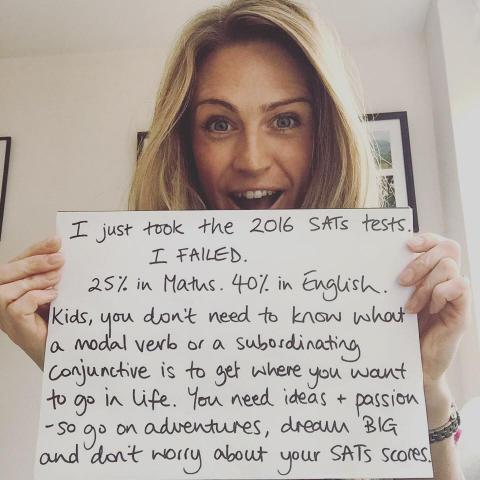 In fact, it seems lots of young recruits would benefit from the new curriculum, with difficulty constructing emails and using text speak rather than properly constructed sentences cited as a problem in the workplace. But listening to the protests last week and posts shared around social media idealising primary education as ‘creative play’, it’s easy to forget that England is ranked lowest in the developed world for literacy.

Analytical and independent thinking skills are integral to the development of a young person, but you can’t freely express yourself on a piano without first learning how to play. The same goes for children, who need spelling, punctuation and grammar skills to be able to speak and write with clarity. Employers won’t give someone a job if they can’t be bothered to spell correctly.

Children sobbing because they find a test too hard may seem cruel. But if we don’t teach them resilience, the value of hard work and learning from mistakes, those tears may still be there long after they’ve left primary school.

Life's a test. It's about time parents learnt that lesson, too.